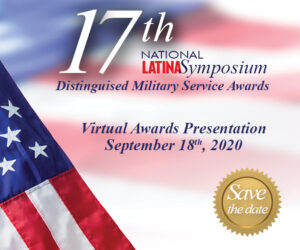 Washington, D.C. ––September 11, 2020 – LATINA Style Inc. in partnership with Parents Step Ahead (PSA) will host the 17th Annual National LATINA Symposium – a national platform recognizing Latina achievements in our military forces. The Conference will be held virtually on Friday, September 18th, 2020 from 9:00 a.m. – 1:00 pm. Honoring Latinas serving in the Armed Forces, the virtual conference empowers, develops and highlights Latinas in our military, veterans and Veteran Employee Resource Groups in corporate America. Since 2004, over 177 Hispanic women and two men have been recognized for their exemplary record and commitment to serve in our Nation’s Armed Services

The highlight of the program is the Distinguished Military Service Awards. LATINA Style is proud to present the only national awards program honoring Latina military and civilian personnel who through their service have enhanced the role of Latinas in their organizations.